One of Baltimore’s oldest public markets located on the west side of downtown. 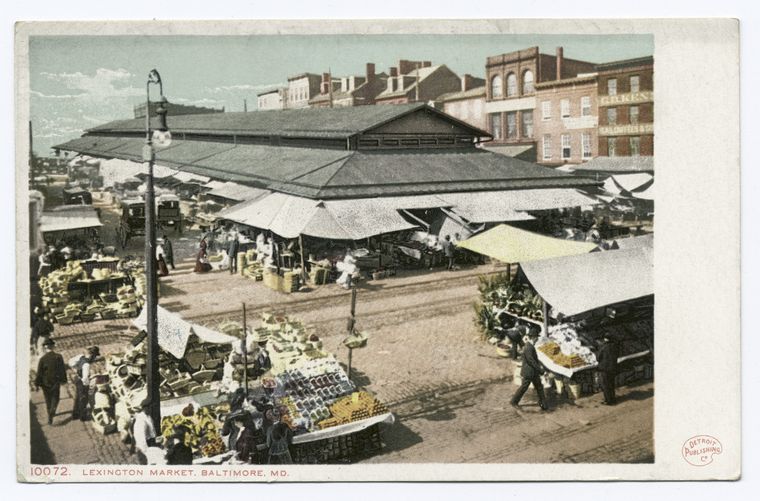 This is a collection of excerpts and transcripts of articles, editorials, and letters to the editor published in the Baltimore Sun. Find additional information about the history of Lexington Market in this interactive timeline (based on this Google Sheet).

I have been reading the articles relative to building a new Lexington Market house and notice that they are all by men. Taking into consideration that very few men go to market and as the purchasing is done almost entirely by women, it seems as if they should have a voice in this matter. I have marketed in New York and Philadelphia in inclosed market houses and found them quite as cold in winter and quite as hot in summer, with the additional of foul orders not perceptible in the Lexington. Anyone desiring to compare the inclosed market house with the Lexington should go to the Richmond, where the middle markets are dark and evil-smelling, and photographs taken in certain selected places would be quite as unlovely as those published in an afternoon paper. We, the women, agree with the Boston delegation that is is the “best in the country.”

HOUSEKEEPER. “FROM THE PEOPLE: Letters From Readers Of The Sun On Subjects Of Interest NO NEW LEXINGTON MARKET A Woman’s Protect Against The Project–Her Experience In Other Cities–‘Beit In Country.’” The Sun (1837-1991). May 30, 1907.

That the stallkeepers of Lexington Market are practically unanimous in their stand against the project to convert that famous mart into a modern, many-storied structure was the declaration yesterday of Market Master Thomas H. Paterson.

“At least 200 of them came to me Saturday,” Mr. Paterson said, “to discuss the proposal of the syndicate headed by Mr. R.B. Fentress, about which they had read. Not one of them said he was in favor of the proposed change, and a big majority hooted at the idea.

“Personally, I believe that to convert Lexington Market into an inclosed structure, or even one like Broadway or Richmond Markets, would mean its death blow. I don’t wish to stop any improvements, and I can’t say that I understand thoroughly what Mr. Fentress has in mind, but, if his plans contemplate the removal of the present sheds and the erection of a modern building with closed sides, I am not in favor of them.

“For more than 30 years I have been at the market; and for nearly five years have been market master. I have seen the business grow to a remarkable extent, and it is still growing. People who dealt there many years ago are still buying their household supplies at Lexington Market, although many of the old customers have moved to distant parts of the city and have to come a long way to do their buying.

… [included some details on opinions of visitors from other cities; stallkeeper investments in existing property motivated opposition; unfavorable comparisons to Richmond and Broadway markets] …

“The open market is what patrons want. There is always plenty of ventilation and easy access for crowds. We don’t want artificial heat either, for we get all the heat we need in the summer. Just a little paint and a few new stalls is all that is needed at Lexington Market.

“It is acknowledged now to be the greatest market in the world, and has an international reputation, but if it were changed into a modern place like a big department store it would never retain its old prestige or its volume of business.”

“WANTS MARKET AS IT IS: Lexington’s Master Believes It Unwise To Make Changes THINKS MIGHT BE DEATH BLOW Famous Institution, Declares Mr. Paterson, Would Lose Prestige If Put Under Building.” The Sun (1837-1991). February 5, 1912. Hazel H. Willey writing in 1969 on her experiences at Lexington Market:

Christmas time was the best time of all to go. It would really put one in the true Christmas spirit. The little “lady apples” were piled up and looked so pretty, the big purple and white grapes, oranges and tangerines were stacked in pyramids. Fifty cents worth of these fruits would make the prettiest Christmas table centerpiece. Such a lovely thing on a white linen tablecloth. …

Thursday was the best day to visit. That was when the wealthy did their marketing. The women in their furs would walk ahead sizing up the different meats and produce. Their chauffeurs, in uniform, would be a few steps back carrying the market baskets. That was the day when all the best the market had to offer would be on display. Stallkeepers would have on their spanking white aprons. …

Market day was a day to look forward to and a day to think back on. After marketing was the final joy—the long crisp walk down to Camden Station to her the train home. …

I think of it all sometimes with such nostalgia that I weep inside that it is all part of the past. The city is getting lovelier, the market is nicely enclosed and heated but the old rapport between customer and stallkeeper doesn’t seem the same. Maybe it really is—perhaps the trouble lies with me in that I keep remembering it as it used to be when everyone dressed up to go downtown. …

If I were asked would I have it back and not modernized, I would have to answer with a big “Yes.” 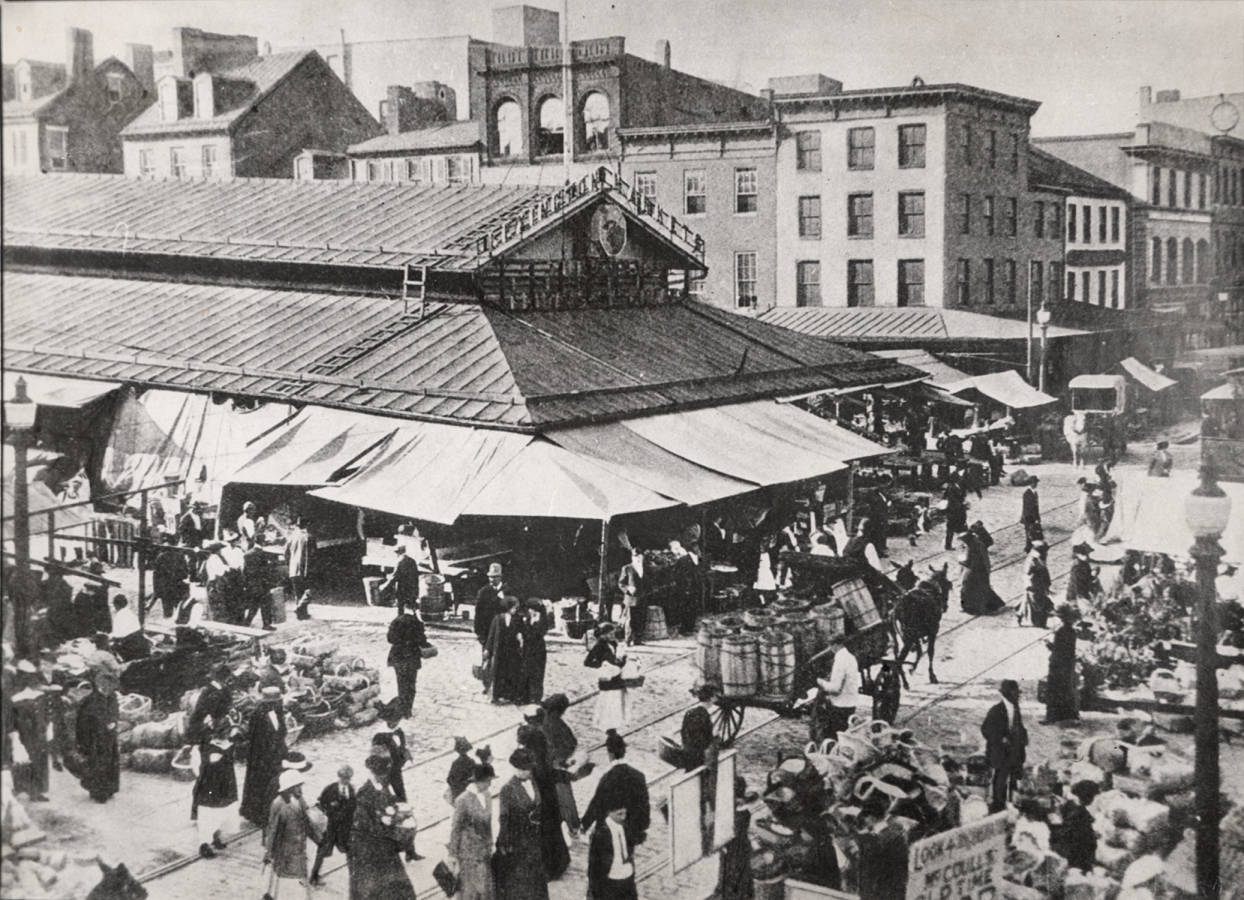 … Apparently, the fame of Lexington Market has reached far and wide. It is to be as much associated with Baltimore as the “attached” houses, the evil-looking crabs that I like so well, and the raw oysters that I was so positive I wouldn’t eat. (Imagine anyone calling an oyster “beautiful.”) I think the market adds as much color and atmosphere to the city as the distinctive Mount Vernon Place. To do away with it would be as much of a calamity as the blowing up of the Washington Monument. …

To the Editor of the Sun—Sir: Let us stop being sentimental about our decadent Lexington Market and face the fact that it has outlived its usefulness along with the covered wagon, the canal boat, cable cars, etc., however picturesque they may have been.

The writer walked through the market last Saturday evening and was appalled by the great number of empty stalls and the high prices marked on the produce of those which were occupied.

There was a time when every good housekeeper went to market because she could buy the best and freshest produce there. With the shift of populations to the outlying areas and the opening of well-stocked stores in these neighborhoods, it is no longer economical or necessary to make long trips to town for the purpose of buying household supplies. I am not mentioning the parking problem, but that, too, should be considered.

The point I wish to make is that it would be the height of folly (granting that I am correct in my analysis) for the city of Baltimore to add another $800,000 to its debt for the purpose of building a new Lexington Market. The idea of utilizing the roof of such a structure for parking purposes may blind the eyes of the public to the fact that there is really no need at all for a market in this area and that the entire space may well be devoted to parking and thereby solve a pressing need in our community.

Last, but not least, please have a little consideration for the harassed taxpayer. There are certain services and improvements which Baltimore must have. A new Lexington Market is not one of them.

… That the old market should be torn down has long been apparent. Conditions in and around it have been the subject of criticism for decades. The rat problem is particularly bad. Many of the old buildings along Lexington street and Louisiana avenue provide shelter for thousands of rodents, and they come into the market every night. Such invasions would be eliminated if the new building was rat proofed. …

Quoting remarks by Mayor D’Alesandro at the market opening:

Today we are witnessing the formal dedication of a bigger and better Lexington Market, rising Phoenix-like from the ashes of the old landmark that added so much to the charm of Baltimore in a by-gone era when life moved at a leisurely pace and good living and good living and hospitality were an essential part of our existence.

… We still retain our hospitality … but the tempo has been stepped up.” 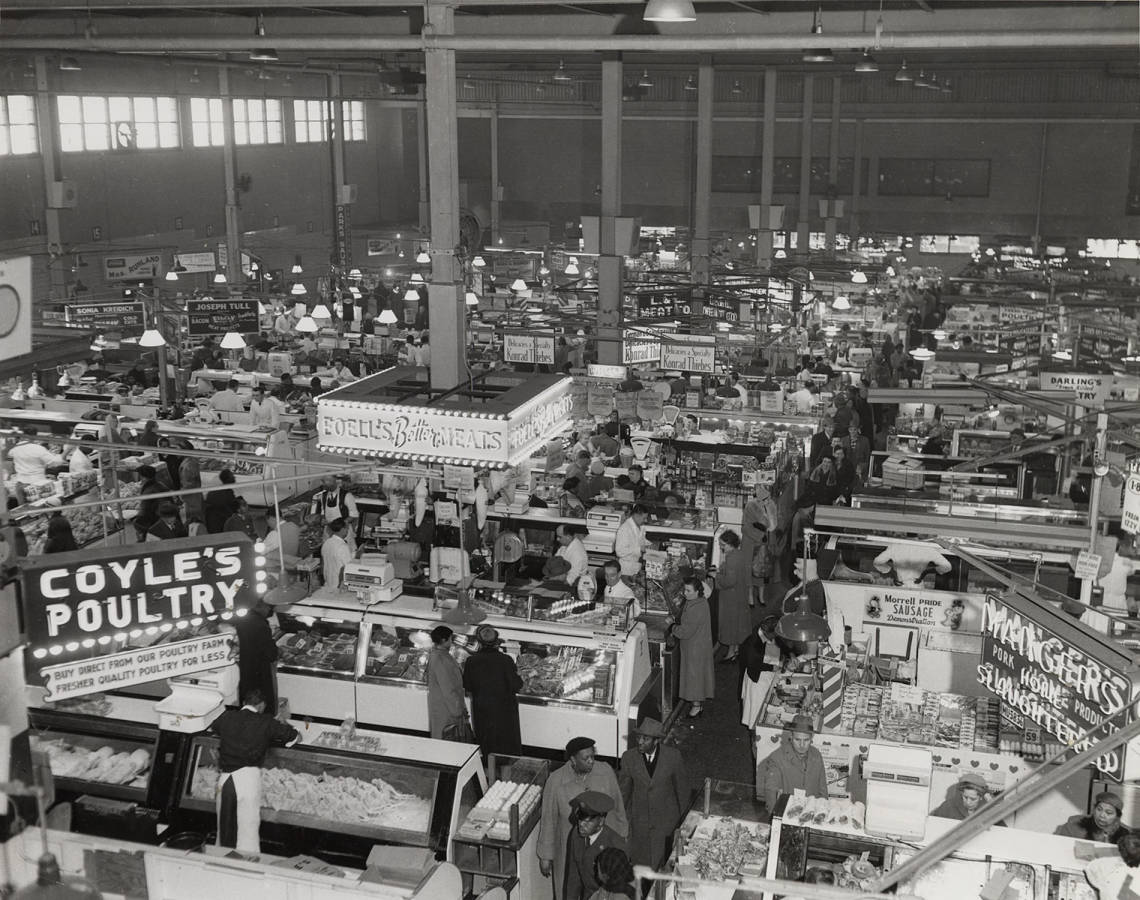 Five men accused of dope peddling waived preliminary hearings yesterday and were held in $5,000 bail each for the grand jury following their arrests by a team of city and Federal narcotics agents.

Their apprehension Friday and yesterday followed a four-month investigation of a “comparatively” large-scale heroin sales ring that operated out of Lexington Market, officials said.

William Franz, general manager of the market since 1972 often watches the festive mob from the balcony near his office and translates people-per-square-foot into estimates of crowd size: 2 1/2 to 3 million visitors annually at the market, he says, spending an average of $6 each.

Gross sales also are an educated guess at the largest of the eight city-owned markets, since merchants pay only stall rental and not an additional percentage of sales as in shopping centers. Mr. Franz puts those sales at $30 million a year. Revenues for Lexington Market, Inc., are roughly equal to operating expenses, he says, at $2.5 million annually. …

Mr. Franz, 41, is sensitive about the market’s image as a landmark-in-decline, and points out that revenues have nearly tripled from $900,000 in 1972. There were only 75 merchants that year, he says, with the East market 27 percent vacant and the West market 95 percent vacant. Since 1974, both markets have been 100 percent leased and the facilities upgraded. With the opening of the Arcade, there will be more than 160 merchants.

But the past decade has not been kind to Lexington Market. In 1978, construction on the Lexington station of Baltimore’s 8-mile, $750 million subway began to disrupt business seriously and continued to do so for more than two years. Mr. Franz estimates a 10 to 15 percent dropoff; some merchants put the figure at 30 to 40 percent. …